Samsung’s next flagship phone Galaxy S6 is expected to be unveiled next month on the sidelines of the Mobile World Congress, Barcelona. While the rumour mill is busy churning out something new every other day, it’s the first time that pictures of the phone’s alleged frame have appeared online. Just like Samsung’s recent offerings, the Galaxy S6 is also said to feature a metal frame. French website NoWhereElse.fr has published what it claims to be the images of Galaxy S6’s metal frame. The images depict the frame from all angles and suggest a design similar to Apple’s iPhone 6. The 7.2mm thick frame sports carved-out edges that are rounded near the corners. The right edge sports cutouts for the power/screen lock button while the left features volume rocker slots. The top edge has holes for a microphone and IR port, while the speaker grille, micro-USB port and a 3.5mm headset jack are at the bottom along with antenna cutouts. The back has slots for the camera, LED flash and heart rate sensor. The report also confirms the pricing of the Galaxy S6 and S6 Edge, which was leaked earlier. 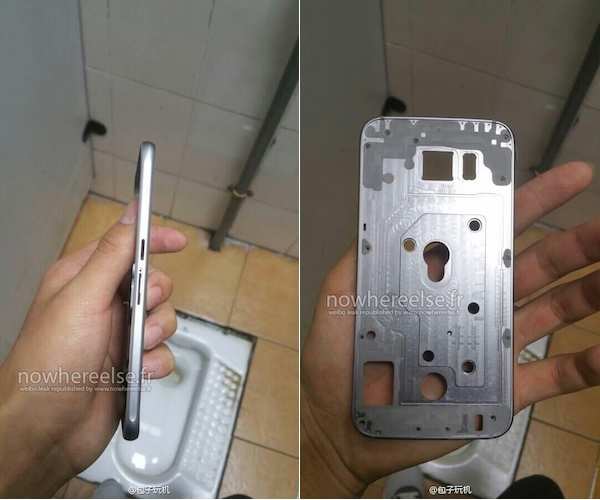 Much-awaited Galaxy S6 will take over from Galaxy S5 as Samsung’s top smartphone and is expected to be a huge departure from its predecessor. Samsung is expected to retain the same metallic design in its Galaxy S6, along with a 2K (1440x2560p) screen. Taking forward the Galaxy Note Edge design, Samsung is said to be working on a Galaxy S6 variant with curved screens on both edges. If the reports of overheating are true, Samsung would likely use its own Exynos chip in the international variant. This chip is said to be designed on 64-bit architecture. Samsung usually sells Exynos-powered smartphones in 3G-dominant markets. Other likely features of Samsung Galaxy S6 features are 20MP rear camera, faster 4G radios, 32 and 64GB storage options, microSD card support and battery capacity of over 3,000mAh. Samsung is also said to be working on add-on back panels that provide extra functionality to the smartphone. Among the back panels being developed is one that turns the rear casing into an e-book reader, while another is said to put all the S Health features on the back.