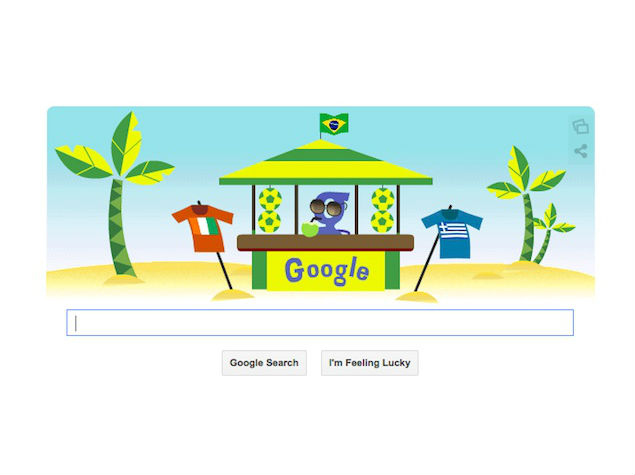 Google has taken to the beaches of Brazil for its latest doodle from the ongoing World Cup 2014 series. This time around it features the Greece vs Cote d’Ivoire match, which took place at the Estadio Castelao in Fortaleza. Google has routinely been creating doodles which showcase either the most anticipated matches, or the various tricks of the trade of the sport of football. One of its previous doodles (number 27) featured the Netherlands vs Chile match. The tribute had seen office workers switching the LCD monitor alternately between a work-related graph and the match that was going on.

The doodle of the Greece vs Cote d’Ivoire match has one of the ‘G’s’ sporting a pair of sunglasses and drinking out of a coconut, in a beach football merchandise stand. The surroundings are marked with palm trees and golden sand. A flag of Brazil flutters on top of the stand, and the roof of the stand is done in green and canary yellow. The word ‘Google’ is written in front of the stand in blue in a banner-like format. Green and canary yellow footballs are strung along both sides in the stall, while a Greece shirt flutters on the left and a Cote d’Ivoire jersey on the right.

When clicking on Google’s animated World Cup 2014 doodle number 31, users are directed to search results of Greece vs Cote d’Ivoire. Along with the results in the live scores and schedule widget, there are match reports as well as news about the teams, players and the World Cup.

The Greece vs Cote d’Ivoire match, which was played at the Estadio Castelao in Fortaleza, saw Greece defeat Cote d’Ivoire 2-1. While Greece drew first blood through a Andreas Samaris goal in the 42nd minute, it was nullified out by Wilfried Bony’s goal in the 74th minute. The match looked set to head for a draw, when Georgios Samaras scored off a penalty in the third minute of injury time.

In other news, Italy was ousted in a controversy-laden match with Uruguay after a goal by Diego Godin in the 81st minute sealed a second spot in Group D behind group leaders Costa Rica. Italy has crashed out of consecutive World Cups now after having lifted the Jules Rimet trophy in 2006.

The Greece vs Cote d’Ivoire match Google doodle is visible in almost all the parts of the world, save East, West and North Africa, and a part of far South East Asia.