Apple has already upped its smartphone security standards by adding a fingerprint sensor to the iPhone 5S. A recently published patent application, however, hints that Apple may only be scratching the surface with Touch ID.

The application details a system in which your iPhone would be able to automatically adjust its security settings based on your location.

It sounds sort of like a smart lock screen that changes depending on your location.

For example, if you’re at home, your iPhone may eliminate the passcode entirely or prompt you to enter a simple code to unlock your phone.

If you’re on the subway or at a crowded event, however, your iPhone may require a more thorough security check to unlock your device.

This could include technology like scanning your retina to unlock the phone, requiring a Touch ID swipe, or using some other type of biometric test, according to the patent. 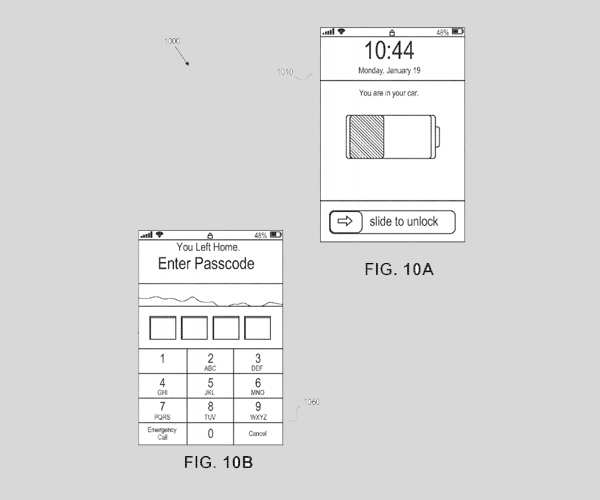 The purpose of this feature would not only be aimed at keeping intruders out of your phone, but it would also make it easier to unlock your phone quickly. Here’s what Apple says in the document:

However, longer and more complex passcodes are more difficult for a user to enter. Frequent or unnecessary requests to the user for authentication can be burdensome and harm the user experience.

Your iPhone would use GPS data combined with other types of information, such as identifying nearby devices like your Mac or your home Wi-Fi network, to determine where you are and how you’re using your phone.

The patent also notes that this type of contextually aware behavior can be applied to features other than security as well, but didn’t mention any specifically.

This doesn’t necessarily mean we’ll see this technology surface in future iPhones, but it does suggest that Apple is at least experimenting with iPhone software that changes depending on your location.

Tweet
Share
Share
0 Shares
Tags: Apple has already upped its smartphone security standards by adding a fingerprint sensor to the iPhone 5S. A recently published patent application, hints that Apple may only be scratching the surface with Touch ID., however