Xolo, the Indian smartphone brand that started out with phones based on Intel’s reference design, is now pretty aggressive in the budget segment. We see a new launch from the company almost every alternate week. With Q1200, Xolo promises to add value with gesture control and software enhancements. Can the company’s attempt bear fruit? We try to find out in our review.

Build & design
Compared to other Xolo smartphones, Q1200 features a more premium design with its partially metallic back panel and slim frame (it’s just 6.85mm thick). The phone is as slim as the iPhone 5 if you discount its protruding camera lens.

It’s also one of the few Xolo phones that don’t come with a removable cover (and battery). We have no qualms in saying that Q1200 is one of the better-built smartphones compared with those from other Indian brands. 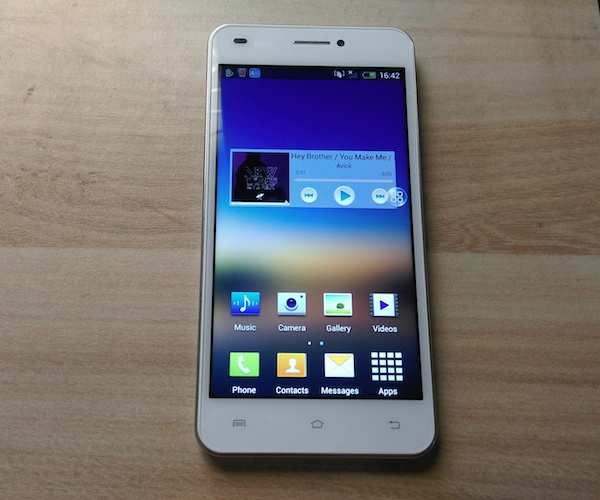 The power/screen lock key and the volume rocker key are located on the left side while a tray that houses slots for micro-sim card and microSD card is placed on the right side . While the location of the keys facilitates easy access, the keys don’t really offer good tactile feedback and are a bit soft.

The back features a big metal panel sandwiched between two plastic pieces. It features an 8MP rear camera with Sony’s Exmor R Sensor and a dual-LED flash, besides two speaker grills. The camera lens protrudes out, but Xolo has protected it with Gorilla Glass to prevent scratches. 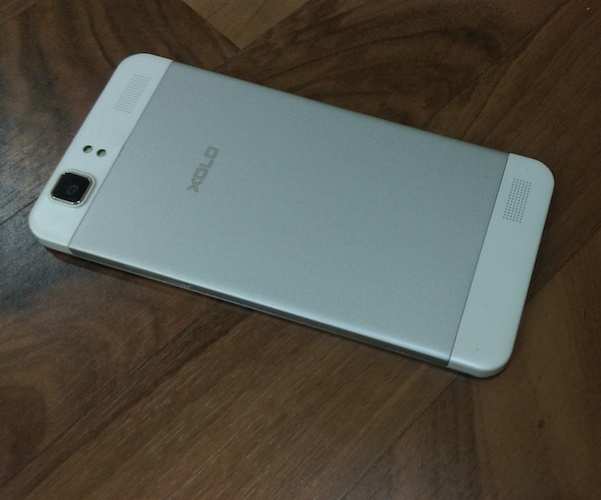 Xolo Q1200 runs Android 4.2.2 Jelly Bean, but the company has promised the Android 4.4 KitKat update in the first week of July. Unlike other Xolo phones, Q1200 has been skinned and the UI looks different from stock Android. The phone’s UI, based on Kobee launcher, can be themed and some themes even eliminate the app launcher, placing all app icons and widgets on the home screen, similar to the UI seen in MiUi, Gionee and Lenovo software. It includes some transition effects as well.

The settings menu, notifications tray and setting toggles, all look very different, and may not appeal to everyone. One peculiar thing we noticed was that Xolo’s system apps had a soft back button, which is a redundant element given that Android has a back key. 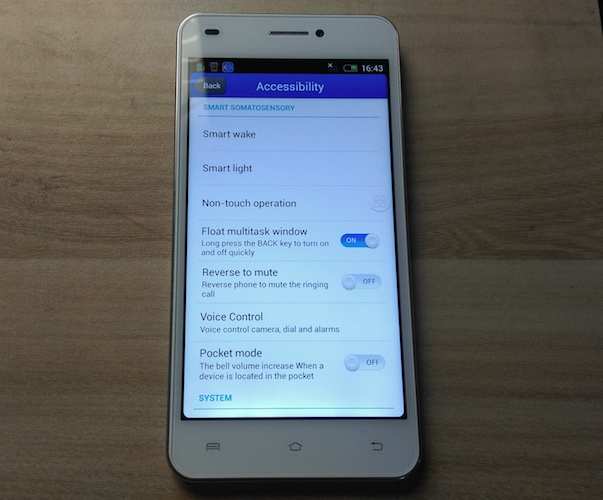 One of the headline features of the phone is support for gestures, including double tap-to-unlock, flip to silent and cold access apps. If you activate these gestures, the phone’s proximity sensor looks for them and triggers an action. Drawing the letter ‘m’ on the phone in locked state unlocks it to the music app. There’s support for motion gestures similar to Samsung Galaxy S4 and Lava Iris 504Q, allowing users to browse through content and apps by waving their hands.

We tried using the gesture control features and found that these worked pretty well. But most users would get bored and abandon them after the initial fascination. So these are a bit gimmicky. Also, we don’t understand why settings for gestures are hidden under the Accessibility menu.

The phone also offers voice commands for accepting and rejecting calls, capturing a shot with the camera, and for snoozing or silencing the alarm. We were not able to get them to work in the first go. You’re really better off not using them. 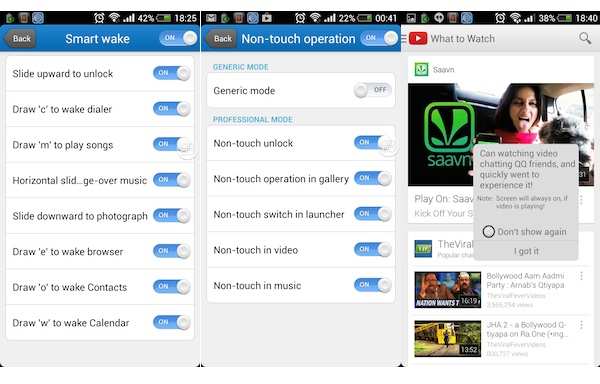 Xolo Q1200 also offers a floating panel that lets you play music and videos in floating windows on top of other apps. It can be minimized when not needed.

The phone also includes a security vault to password protect apps as per the user’s preference.

Overall, Xolo has added a number of software and gesture features to the phone to add value. We don’t think everyone will find them useful though. Also, some parts of the software feels unfinished and include prompts with grammatical errors.

Xolo Q1200 sports an 8 MP rear camera with Sony Exmor R sensor, an LED flash, and a 2MP front camera. The rear camera takes good quality images in daylight, and even pictures taken indoors in less light turned out to be decent. 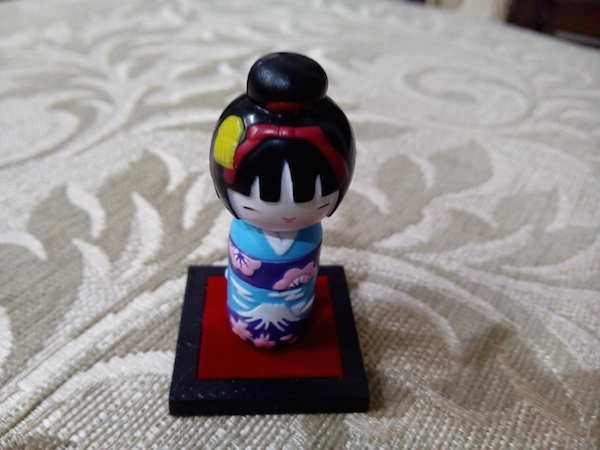 Colour reproduction is good. We did not face any issues while taking macro shots and the outcome was good.

The rear camera is capable of shooting full-HD videos and the quality was acceptable.

The front camera doesn’t take good quality images. It is good for video chats though.

Xolo Q1200 is powered by a 1.3GHz MediaTek MT6582 quad-core processor and 1GB RAM. While using the phone, we did not encounter any hiccups while launching and switching between apps and there was not much lag except for scrolling through the notifications. The reason for this could be the custom app launcher.

Casual games such as Subway Surfers run smoothly. However, we encountered some minor frame drops while playing graphics-heavy games like Asphalt 8.

In terms of synthetic benchmarks, it scored 5,871 in Quadrant Standard, 16,436 in AnTuTu, 1167 in Geekbench 3(Multi-core) and 54.1 in NenaMark 2, lagging behind Moto G by a big margin in some tests. But we’d not recommend a phone based solely on benchmarks as real world performance is different at times.

Out of the 8GB storage, about 5GB is available to the user. You can also expand the storage with a memory card of up to 32GB.

The external speaker on the phone offers loud stereo sound output. It also features DTS technology for clear and richer sound. While the external speakers offer good quality sound, we were not satisfied with the quality of sound delivered through the headphones. The output lacked bass as well as clarity.

Of course, the sound gets muffled when the phone lies on its back, which is a problem with all such designs that place speakers at the back.

Xolo Q1200 is just another budget option among the multiple smartphones from Indian brands available in the market. In terms of differentiation, the phone offers gesture control and voice command in this price segment. Both the features are not new and the novelty wears out after the initial excitement. Some software features also lack finesse. Lava Iris 504Q+ (both Xolo and Lava brands belong to Lava International) also offers similar features at the same price point. 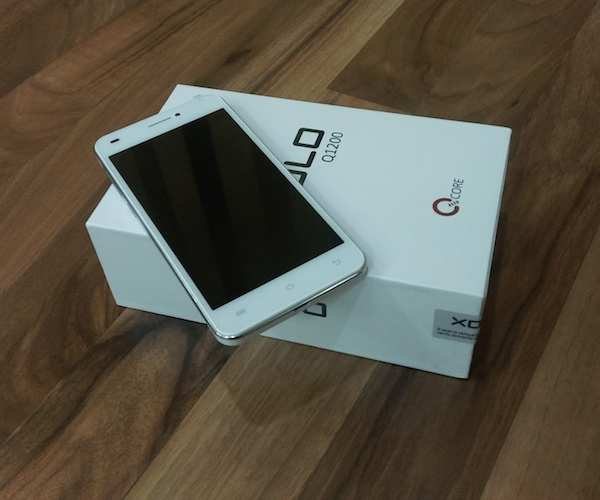 Xolo Q1200 does not offer dual-sim functionality so if you’re looking for that, this phone is not for you. It also doesn’t offer performance as good as Moto G or even Xolo’s own Q1100. However, the rear camera and good build quality are the strong points of Q1200. At a price of Rs 13,999, we’d not recommend this phone if you’re looking for good performance. You should take a look at Moto G and Xolo Q1100 instead.

Tags: is now pretty aggressive in the budget segment. We see a new launch from the company almost every alternate week. With Q1200, the Indian smartphone brand that started out with phones based on Intel's reference design, Xolo, Xolo promises to add value with gesture control and software enhancements. Can the company's attempt bear fruit? We try to find out in our review.

Polkadot Buildathon: India, aimed at strengthening the Web3 wave in India, announces the Top 3 winners of the hackathon

9 hours ago IT Voice News