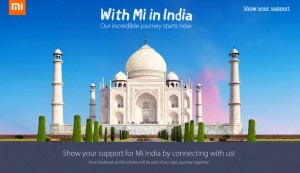 Xiaomi, often called the ‘Apple’ of China, has launched its official website in India, paving the way for its entry into the fiercely competitive Indian

smartphone market in the next few weeks.

“Namaste, Mi Fans! We have officially arrived in India. Join us on this incredible journey at http://www.mi.com/in,” said a tweet on the company’s official Twitter handle.

Founded in 2010 by entrepreneur Lei Jun, the Beijing-headquartered firm has become one of China’s biggest electronics companies that designs, develops and sells smartphones, mobile apps and other such consumer items.

Other Chinese firms selling its handsets in India include Huawei, ZTE, Lenovo, Gionee and Oppo, the latest entrant.

According to the company’s website, it has already sold over 17 million handsets in China. Its portfolio includes devices like Mi 3, Redmi (Singapore USD 169), Mi Wi-Fi and Mi Box, among others. It launched its products in Singapore in February this year.

Earlier this month, the company had also roped in Jabong co-founder Manu Kumar Jain to head its operations in India.

The Indian smartphone market is witnessing strong competition between local and international players, all vying to grab a share of the multi-billion dollar market.

According to research firm IDC, smartphone sales in the country grew almost three-fold to over 44 million in 2013, buoyed by affordable devices made by local firms such as Micromax and Karbonn.

Samsung was the market leader in the category with 35 percent market share in Q1, followed by Micromax (15 percent), Karbonn (10 percent), Lava (6 percent) and Nokia (4 percent).

Affordable smartphones, especially those priced in the sub-$200 category (roughly Rs. 12,000), are doing well. Over the last few weeks, companies have launched affordable handsets like the Lumia 630 and Moto G to tap the booming market.